Routine aquarium maintenance, fish tank cleaning services or duties, and regular partial water changes are the most fundamental actions you can take to proactively maintain a healthy and balanced aquarium.

Here at Fish Geeks we believe that how and when you employ fish tank cleaning services is the single most important factor of success when trying to establish healthy balanced aquaria. Since we are Geeks, we wanted to put together a blog about fish tank servicing as it pertains to the chemistry of the aquarium. After all, we are NOT your typical aquarium cleaning service. Because Fish Geeks is an expert-level fish tank maintenance service, we wanted to write a blog about the kind of impact regular fish tank servicing can have on your success from a chemically quantitative perspective.

The two factors that we’d like to highlight for the purposes of this article are nitrate and alkalinity. Elevated nitrate levels can lead to significant algae problems, and generally indicates that the aquarium services that tank receives does not include an adequate water change schedule. Often paired with elevated nitrate levels is a depressed alkalinity level. The relatively stability of the pH of your aquaria depends on adequate alkalinity levels, and is absolutely key to maintaining a stable and balanced aquarium.

By keeping track of these two parameters (alkalinity and nitrate concentration), you can virtually ensure success in keeping virtually any type of aquaria.

Nitrate, the end product of the aerobic portion of the nitrogen cycle, will accumulate in most aquariums if left unchecked. While not particularly dangerous, especially as compared to its chemical precursors ammonia and nitrite, but generally indicates the accumulation of biological waste products from the animals in your aquarium.

There are limits to what we can test for as aquarists, usually due to the accuracy and precision of the test kits available to your average aquarist. Compounds such as total organic carbon TOC and phosphates will also accumulate in the aquarium system and the average aquarist has limited ability to quanitfy the concentrations of these compounds. Instead, one can use the accumulation of nitrate as a rough indication of the magnitude of these other waste compounds in your aquarium.

But obviously, there is an easier way: water changes.

There are devices that will allow you to functionally lower your nitrate concentration in your aquarium. Sulfur denitrators, bio-pellet reactors, potentially plenums, or even DIY setups. In marine setups, a properly setup protein skimmer will reduce your rate of nitrate accumulation. Employing the efficient skimming with the vodka method can also be an effective way of reducing nutrient waste.

Consider a theoretical aquarium with a steady rate of nitrate production of 10 ppm per week (ppm – parts per million = milligrams per liter – mg/L). This is an average rate of nitrate production. Lightly stocked reef tanks will often produce far less than this, while heavily stocked aquariums may produce far more nitrate than this. This is just a ‘for sake of argument’ value. 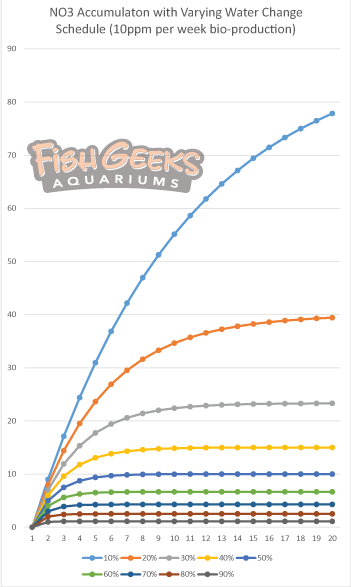 In the image above, you can see a chart of nitrate concentration (vertical axis) over time (horizontal axis). Each colored line represents a different volume water change, all simulations assume a consistent volume of regular weekly water changes.

As you can see in the image above, if you merely perform the often minimum recommended 10% water change every single week (light blue line), you will still have a steadily rising nitrate value over time. Even with water changes in the range of 20-30% per week (orange and gray line), nitrate levels would increase to a level that could potentially cause some algae issues. This lends significant credence to the oft cited water change of 50% (dark blue line) or greater by many seasoned freshwater aquarists.

Note that the cost of saltwater mixes often has marine aquarists looking to minimize nitrate accumulation rather than simply mitigating with water changes.

The most common misperception of the term alkalinity is to link it to the term alkaline. While they have the same roots, they do mean very different things. Alkaline refers to a pH above 7.0, whereas alkalinity is capacity of water to neutralize an acid in solution. While not a direct reflection of pH, alkalinity does have a direct impact on pH. The concentration of hydrogen ions in the water (pH) can be increased or decreased by the addition of compounds that will accept these chemically active hydrogen ions. In aqueous solutions, the most typical chemicals that contribute to this interaction are carbonates and bicarbonates. In the pH ranges of most freshwater systems 6.0-7.5pH, the contribution of bicarbonate is significant to predominant. In the elevated pH of marine systems and some freshwater outlier systems (like the Rift Lake systems) the carbonate ion becomes more prevalent. 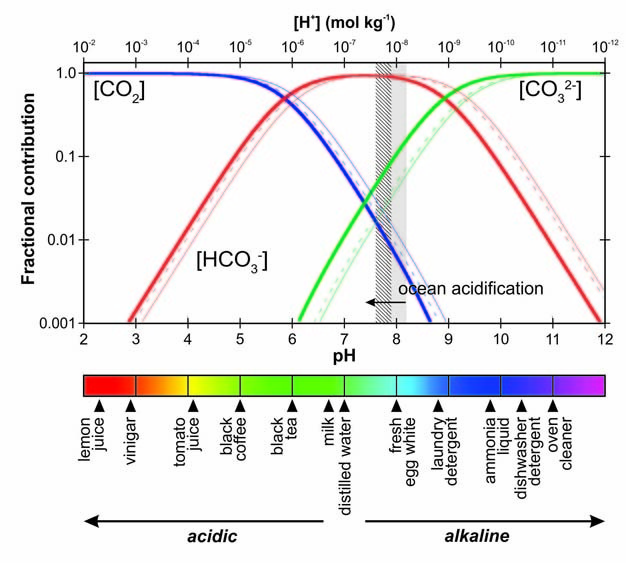 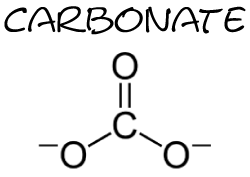 You can see in the chart above how the ratio of the the ions carbonate (CO3) and bicarbonate (HCO3) become more or less prevalent depending on the pH of the aqueous solution. You can also see how carbon dioxide (CO2) is intimately involved in this process, which is why ocean acidification is becoming a problem in marine ecosystems. You can find more information about the carbonate equilibria here.

For the purposes of this article, you can consider alkalinity in terms of the concentration of the carbonate molecules in water, measured in parts per million (ppm) or the equivalent milligrams per liter (mg/L).

In addition to nitrate, the oxidation of ammonia, contributes a small amount of acid to the system. This acid is instantly neutralized by carbonate and bicarbonate ions in solution, depleting the concentration of these ions in the water thereby decreasing the alkalinity level slightly. This means that without outside contributions, a closed aquarium system will have a continually decreasing alkalinity level as nitrate accumulates, as described above. 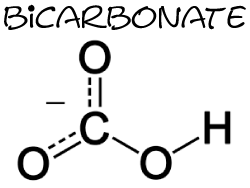 We wanted to find a correlation between nitrate production in a closed system and the corresponding decrease in alkalinity level that will follow.

What we did is take a commonly cited relationship between the amount of ammonia that a system produces with the amount of alkalinity that is consumed during the oxidation of that ammonia. I then extrapolated the nitrogen in the ammonia through the stoichiometry of the aerobic nitrogen cycle to arrive at the corresponding amount of nitrate produced as an end product of the cycle. This allowed me to create a conversion directly between nitrate and consumed alkalinity in a closed system. This allowed us to convert the oft cited 7 mg of Alkalinity consumed per mg of N-NH3 into a more workable 20.96 mg Alkalinity consumed per mg NO3 produced by the system.

Using this relationship, consider the following example described below.


As with the nitrate calculations above, let’s start with a 200 liter aquarium with a steadily increasing rate of 10 ppm nitrate per week produced by the system. Let’s also say your source water has an alkalinity of about 100 mg/L (5.6 dKH). When you perform a water change during your routine aquarium service, you will you export nitrate and dilute the resulting nitrogen concentration during the refill. In addition, you are also exporting acidic compounds and importing new alkaline compounds to replace them. This directly impacts your alkalinity over time and has a huge impact on the stability of the pH of the system.

You can see that if you only change 10% of your water weekly (orange line), your alkalinity level will not stay stable over time, in fact it drops quite rapidly. You can see from this chart, that in order to maintain alkalinity over time with water changes alone (and moderately hard tap water), you will need to change at least 30% (yellow line) of your water every week in this example, failing that you’ll see a depression on your alkalinity of about 10% or more. 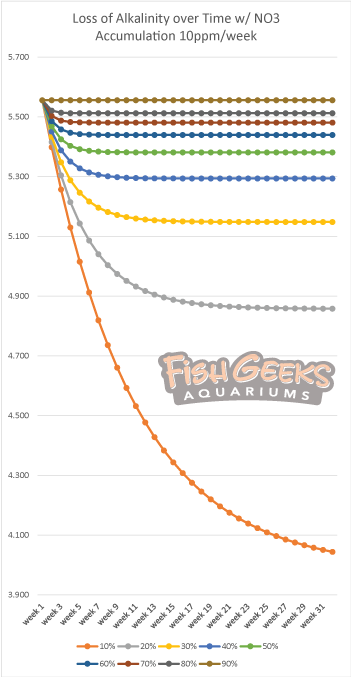 If you consider the accumulation of nitrate in a closed system it becomes readily apparent why regular water changes become necessary, and that there is a minimum level of change that is required in order to keep nitrate levels in check. Further driving home the point is the impact that water changes have on alkalinity. It is readily apparent that larger volume water changes are important if maintaining the highest level of aquarium aesthetics and stability are required.

In lieu of the water changes that this simulation would seem to call for, it is also possible to maintain adequate alkalinity levels with chemical buffers. However, while carbonate and bicarbonate buffers can help with maintaining adequate alkalinity and a stable pH, they will not help mitigate the accumulating nitrate level that would otherwise accompany the depressed alkalinity.

Fish Geeks therefore recommends, with evidence, that regular partial water changes should not only be a part of your normal aquarium maintenance service, they should be the focus. Fish Geeks recommends a minimum of 30% water change, and would recommend a far larger percentage for the expert aquarists amongst us. 😀

If you liked this articles, be sure to follow our Fish Geeks Facebook Page the best way to stay abreast of all the geeky updates. 😉